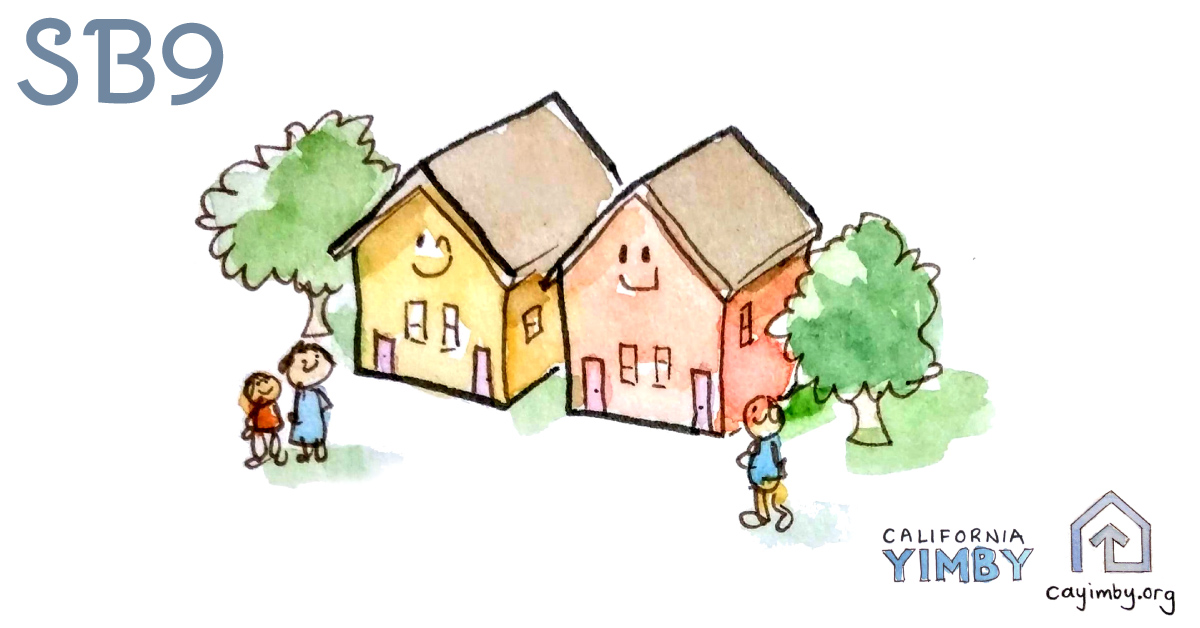 Senate Bill 9 has received a fair bit of fanfare for its relatively minor proposition: allowing lot splits and duplexes to be permitted on properties currently zoned for only one home. UC Berkeley’s Terner Center for Housing Innovation has a new report coauthored by its new Managing Director Ben Metcalf (notably the former head of California HCD) analyzing its potential to marginally increase housing supply in California.

Senate Bill 9 would allow property owners to split their lots over a 2,400 square foot minimum into two lots, for up to two dwelling units on each new lot. It builds off major reforms in Accessory Dwelling Unit (ADU) law which have kicked off a marked increase in small-scale housing development across the state—showing strong evidence that strict land-use regulations are a primary barrier to producing more supply to meet demand. This law may not be applied to high fire-risk zones, historic properties, or demolition of housing for low-income households But how much housing would this law actually produce?

The Terner Center partnered with MapCraft Labs, which developed a financial feasibility model to assess how much new housing supply would “pencil out” on existing single-family parcels if SB9 were to pass. Their modeling relies on data from the rental and home sale market, investor expectations, surveys of construction costs, and parking requirements, to name a few key variables. However, the authors are cautious to note that feasibility does not imply that a development will happen. “Converting a house to a duplex and renting out half may be most profitable for a homeowner, but that will not happen if that homeowner is uninterested,” they note, or if the property owner does not have enough capital up-front to develop.

This is emphasized by further findings that “nearly 97 percent of single-family homes would be retained under SB 9’s provisions, either without any modification or with less intensive development (e.g., dividing the existing structure to enable a duplex conversion).” However, market feasibility is sensitive to various economic factors including construction costs and sale prices, and the owner-occupancy requirement could limit how many market-feasible parcels actually see new development occur.

On the other hand, regional variations in SB9’s impact could be a major boon for both coastal urban areas and California’s inland rural regions. “Analyzing new market-feasible units per eligible single family parcel finds that Yuba, El Dorado, Sutter, and Nevada counties would see the most new market-feasible potential per parcel, although the overall number of new feasible units is relatively low compared to larger counties,” the authors observe. “Many coastal California counties exhibited higher than average per parcel unit ratios, such as Marin, Santa Cruz, San Luis Obispo, and Santa Barbara counties, signaling that rents and sales prices there could support new homes resulting from SB 9.”

Ultimately, SB 9 would only be one tool in the toolkit to address the crisis-level housing shortage, but with the worst housing insecurity of any state in the nation, Californians need all the help they can get.