A new study from the UCLA Lewis Center for Regional Policy Studies and MapCraft makes a compelling case for legalizing fourplexes statewide. While market conditions vary, the potential of allowing fourplexes in single-family neighborhoods is significant — and could make a major dent in the housing shortage and affordability crisis.

Making it legal to build multifamily housing in California, such as fourplexes, is a prerequisite to ending the housing crisis. In part, that’s due to the abundant evidence that the state has not zoned for enough homes to meet the housing needs of its current population — let alone expected population growth in the future. And current zoning codes make building multi-family housing far too difficult, and, in many cases, illegal. Sprawl development that consumes agricultural lands and open space is the default, but it exacerbates other pressing problems: it’s bad for public health, bad for human relationships, and bad for social justice. So, what to do?

The UCLA paper by Monkkonen, Carlton, and Macfarlane offers a well-supported prediction of how legalized fourplexes could change our housing situation. Using parcel data from UrbanFootprint and mapping tools from MapCraft, the authors found potential for doubling or tripling housing production in some areas, particularly on lots where an old single-family home would otherwise be replaced by a larger single-family mansion. Here’s what that looks like: 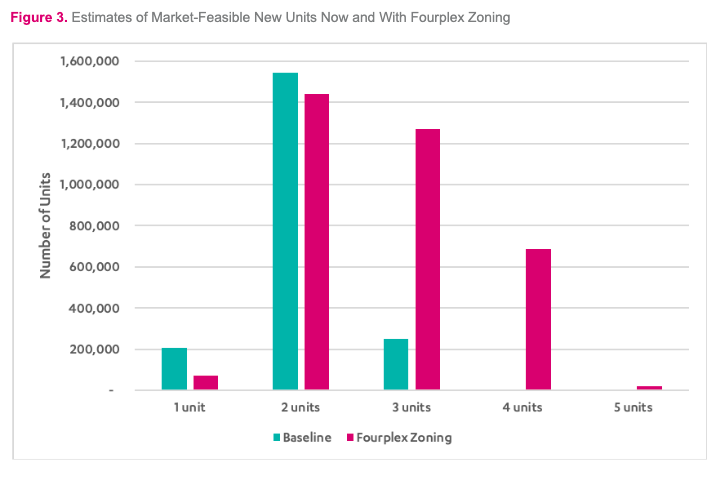 This varies quite a bit by region. For example: “Impacts are substantial and similar for the more expensive coastal markets,where market-feasible production would more than double,” the authors note. “They are much less pronounced in many of the central valley regions. In Fresno County, for example, we estimate that the number of market-feasible units would increase by less than a fifth.”

Moreover, the data shows that “state ADU and Junior ADU legislation has created the market-feasible potential for nearly 1.5 million new units.” This comes from a series of bills that California YIMBY was proud to sponsor. So, what are we waiting for? Let’s build on our successes and allow 1.2 million more homes, particularly for growing coastal populations, starting with one simple reform.