While one should avoid their labor becoming further empirical proof of Brandolini’s Law, a report by The Embarcadero Institute on the state’s housing shortage can hopefully prove instructive as to why one should be wary of organizations offering simplistic assessments of California’s housing crisis. While serious people can disagree about assumptions and methodologies, a large part of admission to the housing debate is transparency about both. Unfortunately, the Embarcadero Center offers neither.

Taking aim at a 2016 McKinsey and Co. report which projected that California needed to build 3.5 million additional homes by 2025 in order to stave off the worst effects of the state’s housing shortage, The Embarcadero Institute offers several competing visions of how to measure the state’s housing deficit: one based on Texas’ current housing per capita, one based on a “line of best fit”, and another based on California’s jobs-to-housing ratio. Each is illustrative of a sleight-of-hand designed to make lay readers assume a level of analytical rigor that’s completely absent from the report.

First, the report claims that the McKinsey report errs in using New York as a suitable proxy for California. A more suitable benchmark, they claim, is Texas–a state more demographically similar to ours in terms of ethnic makeup, average household size and in population growth. As such, California should use Texas’ housing units per capita figure, (0.39 rather than New York’s, (0.42), to project housing needs for California. As such, that 2025 target should be a mere 1.5 million new homes, rather than 3.5 million.

In this, the Embarcadero Center makes a reasonable contention. Perhaps California should engage in production levels that better resemble Texas than New York, (NB: the actual McKinsey report used an average of New York and neighboring New Jersey), given the many similarities between the two states. Yet even if one ignores California’s  significant housing deficit stemming from historic underproduction, (according to the California Department of Housing and Community Development, the majority of homes in California were built before 1983), there are still issues with the Embarcadero Institute’s methodology. Claiming Texas’ 0.39 homes per capita as an equivalent for California and thus extrapolating that California needs to construct only an additional 1.5 million homes by 2025 misses several important factors. 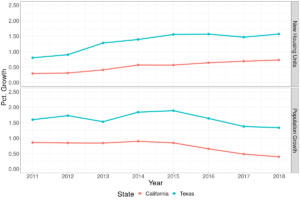 As the above figure shows, not only did Texas grow its housing stock faster than California between 2011-2018–it also gained far more people relative to its original population. Texas’ population grew by more than one percent starting in 2011 whereas California’s population never crossed that threshold over the last ten years. Meanwhile, Texas’ housing production kept pace with its population growth, adding housing units in excess of new persons, while California didn’t. Therefore, it’s natural that Texas and California would have similar housing per capita ratios–the former is experiencing a population boom and hasn’t had time for its stock to catch up while the latter has been underbuilding for decades.

Next, the Embarcadero Institute uses a “line of best fit” approach that estimates a regression that fits a polynomial trendline to the relationship between every American state’s number of housing units and its total population, (Figure 2.) It then uses that trendline to conclude that if California’s population were 42 million, (as the Department of Finance predicts it to be in 2025), the state would need 15.4 million homes. While this sounds complex, it’s actually a less high-profile example of a canned Excel function making its user look foolish.

Those following the COVID19 pandemic closely will recall Pres. Trump’s Chairman of the Council of Economic Advisers Kevin Hassett proclaimed back in May 2020 that “a cubic model” showed that COVID19 deaths would soon drop to zero. By forcing Excel to fit a downward sloping curve between the points of a scatterplot showing COVID19 deaths over time, Trump’s White House hoped to lend the veneer of statistical rigor to a completely unfounded prediction. 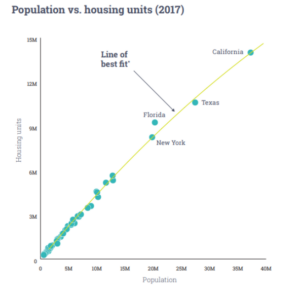 Figure 2: A scatter plot for the “line of best fit” approach the Embarcadero Institute used to project California’s housing needs for 2025 created from plotting 2017 state populations on the x-axis and housing units on the y-axis.

Though written prior to the coronavirus outbreak, it was nonetheless nostalgic to see the same approach in the Embarcadero Institute’s “housing per capita” model. Without any justification, the Embarcadero Institute appears to believe that demand for housing peaks after a certain population and begins to shift downwards, (see the equation in Figure 3.) For those who remember how to maximize a function from their high school calculus lessons, after the population of a state reaches about 99,350,000 people, the Embarcadero Institute would recommend removing housing units as demand would somehow trend downwards. Equally puzzling is their assessment that a hypothetical state with 100 people would somehow need -5,671 housing units. Figure 4 continues the line depicted by the Embarcadero Institute in their report to a hypothetical state with 200 million people, showing the absurdity of their methodology in calculating housing needs. 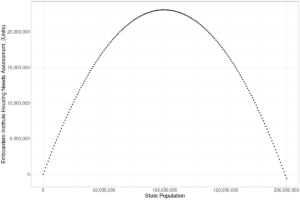 Figure 4: The “line of best fit” the Embarcadero Institute used to determine California’s housing needs in Figure 2 continued to 200 million. Notice that, in their understanding, a state’s housing needs peak at around 100 million residents and start diminishing towards zero afterwards.

Finally, the Embarcadero Institute makes the claim that California has actually overbuilt housing because using a jobs-to-housing ratio recommended by the Building Industry Association, California’s housing needs just 12.9 million units in 2025 given jobs forecasts from the Department of Finance. Given that California currently has 14 million housing units, it could actually get away with destroying 1.1 million homes and still not suffer a shortage. Nevermind the fact that the quoted source of that 1.5-jobs-to-housing-units ratio brings up that figure for assessing housing in metropolitan regions rather than entire states, projecting a surplus based on employment figures ignores the millions of Californians under the age of 18, over the age of 65 and those in school or disabled. In other words, there are massive segments of the population not currently employed but nonetheless still in need of housing.

In sum, the “questions” raised by the Embarcadero Institute’s slideshow in response to McKinsey’s 3.5 million housing units projection raise far more questions about the extent of the author’s grasp of the housing subject and the thoroughness of their work. Housing is complex and there is plenty of disagreement among serious academics and researchers studying the topic. But one can’t mistake presentation for rigor when educating oneself on the state’s housing crisis. The stakes are simply too high and the consequences are too real to allow unfounded claims into the debate.