Our friends at SPUR released a strong new manifesto in March, “What Will It Really Take to Create an Affordable Bay Area?” The think-tank has consulted several population projections, economic indicators, and good old fashioned principles of compassion to compile a clear vision for a better future.

How do we know how much housing we’ll need in 50 years? Population is a fickle statistic, but it’s possible to accurately describe a range of likely future population growth. Stephen Levy at the Center for Continuing Research on the California Economy prepared two population projections for the Bay Area—a high and low threshold, with US Census projections at the median.

With these projections, The Concord Group then modeled an estimate of job growth and housing needs over the next five decades of estimated population growth. With every Bay Area county already showing an imbalanced ratio of new jobs to new homes built, SPUR estimates that the Bay Area fell behind by roughly 699,000 homes needed to shelter its growing population over the past twenty years. Low-income workers have faced growing rent burdens, and displaced further from the urban cores as a result.

To make up for the ongoing housing shortage and keep pace with population growth, SPUR urges building 2.2 million new homes regionwide, or roughly 45,000 per year. This is far more ambitious than recent targets proposed by the Metropolitan Transportation Commission’s CASA Compact; higher than the state’s Regional Housing Need Allocation (RHNA) estimates; and more than twice the rate of construction over the past decade. We have a lot of catching up to do. 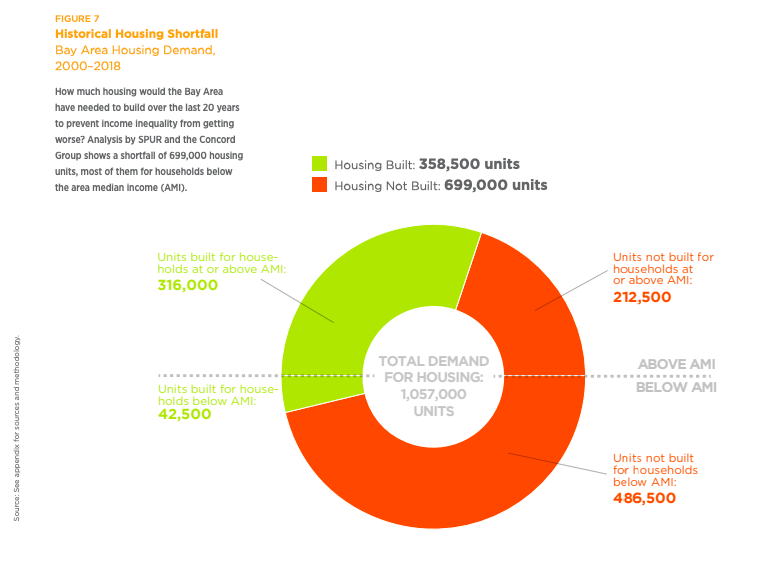 The first requires thinking outside the box, and looking to other countries for inspiration: “If we treated housing as infrastructure, the same way we treat roads and water delivery as infrastructure, what in our housing delivery system would change? For starters, it might not be enough to rely solely on the private market to provide enough housing.”

Even our public subsidy system for affordable housing relies on market forces, such as the LIHTC tax credit market, making affordable housing production feasible mostly when housing costs and land prices are already rising. We need to make it possible for public investment to build abundant housing at the bottom of the market, when land acquisition costs are low. “There can be no sacred cows,” SPUR cautions us.

To prevent displacement, SPUR says building abundant supply is only part of the solution. “Finding ways to strengthen community ownership of land, taking existing housing out of the speculative market and making it permanently affordable, and developing other tools to stabilize neighborhoods are of critical importance in addressing the housing crisis,” the report says. Price controls and paths to stable homeownership can form part of this strategy.

This is getting at a crucial point: we need a cultural paradigm shift around housing. How can housing build community wealth without concentrating wealth in the hands of a few? “The American Dream has always involved land ownership, from the Jeffersonian agrarian ideal to the cultural elevation of the single family home and the white picket fence,” the report says. “Yet other countries and cultures do not place homeownership on such a pedestal.”

If we are going to embrace housing as a human right, some other cultural assumptions, perhaps more archaic and harmful ones will fall by the wayside. That’s real growth we can get behind.