With each passing year, California’s housing crisis has grown worse. Past decisions by our state’s cities and counties to reduce the number of homes it is legal to build have caused high rents, low affordability, and an exodus of middle-income Californians from our cities.

Just over three years ago, then Lt. Gov. Gavin Newsom promised that, if elected, he’d oversee the construction of 3.5 million new homes in California by 2025. Two years into that promise, California is nowhere close to hitting that goal, having produced fewer than  100,000 homes annually during Newsom’s governorship. But where exactly did Newsom’s 3.5 million figure come from?  And more importantly, how many homes do we need, exactly, to right the ship?

While any empirically sound and informed assessment of housing production will conclude that the answer to the latter question is an emphatic “much more than we’ve been doing for the past 40 years,” the exact number of homes California needs to build to make California affordable to everyone is elusive. As with any predictive effort, one’s conclusions depend largely on the assumptions used to build the model.

Thankfully, California need not adhere to Soviet-style central planning and can rely on a figure that more effectively captures the scale of the shortage better than any planning or demographic model: The average home price.

Understood simply, a price is a constantly fluctuating measure of demand. One can see the dynamic at work when hailing a car with a ride-share app after a large sporting event or when visiting an airport bar. Given fixed supply, high demand will make prices rise for scarce goods. Though housing markets are far more complex than the simple models of introductory Economics, one can see this dynamic at work right now with prices falling across American cities in response to the plummeting demand introduced by the COVID pandemic.

As such, the true metric of whether California is meeting its housing targets should be affordability metrics. Rather than focus on production numbers, cities and regions should focus on what percent of their housing stock is affordable to a school teacher, grocery store clerk or a variety of professions crucial to a functioning society.

The real test of what constitutes “sufficient” housing production is, therefore, whether  a majority of Californians are able to afford suitable accommodation within a given place without hardship.

If one is forced to come up with a number, however, paramount to any analysis of the state’s housing deficit is an accounting of the accumulated deficit from decades of under-building relative to population growth. As the figure from California’s Department of Housing and Community Development shows, housing construction, but especially multifamily construction, dropped off significantly starting in the 1990s. Population growth didn’t abate during that period, but rather increased due to in-migration and the births of new Californians. By the turn of the millenium, the state was already significantly in arrears. 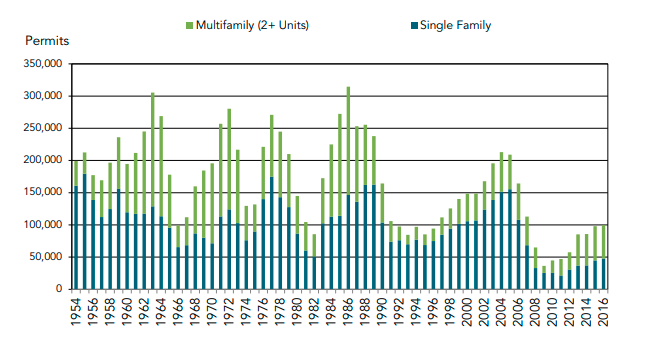 Of course, estimating the size of this deficit is also complex. The ratio of people to housing units is wildly dependent on a series of factors. Families need fewer units than single adults, but average family size also fluctuates based on ethnicity, religion and the state of the economy, among other factors. The age at which the average person marries also affects demand for housing, as does housing price, which forces people to crowd into living spaces designed for fewer inhabitants — something which caused excess deaths and infections during the current COVID19 pandemic.

In their 2016 report on this question, McKinsey and Co. extrapolate the housing deficit by using an average of New York and New Jersey’s housing units per capita on California’s population at the time the report was written, arriving at a deficit of 2 million homes. While some have rightly quibbled with using these states as proxies for California, the alternative numbers they arrive at are at times even less justifiable and at others simply nonsensical.

The McKinsey assessment of a backlog of 2 million homes is a guesstimate based on the idea that New York and New Jersey don’t obstruct housing production to the level California does. Thus, those states, in their view, should thus act as a proxy for what California would have looked like if it had met demand for new housing with new homes. However, both New York and New Jersey have long dealt with obstructionists and segregationists, especially in the New York City metro area where demand is most acute. For instance, Westchester County, just north of New York City, entered into a consent decree with the federal government over that county’s long-standing opposition to building affordable housing.

A better projection of unmet demand comes from a trio of researchers from the University of Southern California’s Sol Price School of Public Policy in their 2018 report, “How Much Added Housing is Really Needed in California.” Factoring in the different average household size of various demographics, (known as “headship rates,” or the number of non-dependents divided by the number of households), the authors use 2000 as a baseline year and calculate the backlog by applying the headship rates of that year to 2016. The authors calculate a housing deficit of about 1.1 million units — significantly lower than McKinsey’s estimate of 2 million homes.

But there’s reason to dispute the use of 2000 as a baseline year. California had been underbuilding for decades prior. Further, California was experiencing a slight recession due to the collapse of the first dot-com bubble, which would have decreased the headship rate. Projecting unmet demand using 1990 census numbers or even 1980 census numbers might produce a more accurate picture of both the backlog and of what future demand should look like.

Turning to future demand, an additional two studies project future need beyond the USC trio and McKinsey. A 2018 report from California’s Department of Housing and Community Development, (HCD), gives a target of 1.8 million new units constructed by 2025. HCD’s methodology is slightly opaque, (the report contains no technical appendix), though it appears to rely heavily on Department of Finance population projections. In doing so, HCD assumes that headship rates and population growth operate independently of housing cost when there’s abundant literature that show the opposite. High housing costs force people to delay starting families, take on roommates and also deter people from moving from one metropolitan area to another. As such, HCD’s estimate is likely too low.

McKinsey uses their previous NY/NJ average to projected population growth to estimate California needs to build an additional 1.5 million housing units by 2025, while the USC group uses their headship rate approach to calculate demand for an additional 1.5 million units by 2025 plus additional allowances to maintain a five percent vacancy rate and the gradual replacement of housing stock “due to demolitions or conversions.” Finally, a 2015 Legislative Analyst’s Office report estimates a 1 million unit target by 2025–with the caveat that those units all be located in coastal counties.

What to Make of These Estimates?

What should one make of these divergent numbers? First, one should remember that solving the state’s housing crisis doesn’t mean meeting some production goal. Rather, we can measure progress towards that goal by examining 1) the number of Californians who are rent-burdened, 2) commute times among workers in different sectors, and 3) median home prices.

When trying to measure the scope of the state’s housing crisis, one should be cognizant of the fact that there is no magic production threshold that, once crossed, will suddenly erase the decades of damage that California’s commitment to underbuilding has produced.

Furthermore, one should also remember that demand for housing is correlated with a variety of factors beyond the control of California’s state and local governments. The COVID19 pandemic and the deep recession it continues to produce has diminished the demand for housing in previously hot housing markets. As such, annual production goals, such as those recommended by HCD, are less useful short-term. Rather than focus on annual goals, longer-term aggregate metrics should be utilized to account for the normal ebb and flow of the market as well as the omnipresent recessionary periods that have marked the last 30 years both in California as well as nationally.

Of all these estimates, the USC estimate contains the most rigorous and transparent methodology and the most credible assumptions as its starting point. Nevertheless, there’s ample evidence that California’s underbuilding relative to demand started far earlier than 2000, as the authors posit. Press accounts from 1990 speak of an overheated housing market in the 1980s–with homebuyers engaged in bidding wars and prices rising as much as 30 percent annually in some areas. Would the estimate of 2.8 million homes by 2025 be revised upwards if 1990 or even 1980 was used as a starting point? Future research may bear that question out.

However, all of these numbers produced by differing methodologies all arrive at the same conclusion — that California has not built near enough housing in the past to keep pace with demand and is not building enough to meet future needs. While California has made scant progress towards Gov. Newsom’s original goal, there’s still plenty of time to break ground on the housing all experts agree that the state desperately needs.