As opportunity grows in across the metropolitan United States, tight housing supply has concentrated economic opportunity in more highly desirable neighborhoods. At first glance, that sounds redundant, doesn’t it? Not really—when UC Berkeley’s Terner Center for Housing Innovation took a closer look at the data, they found something startling: 40 percent of the nation’s high-opportunity neighborhoods remain dominated by single-family housing. And it’s not just because of sprawl in the sunbelt. Even booming job centers like the Seattle-Tacoma metro region saw a slight increase in predominantly single-family neighborhoods over the past few decades.

This is the one of two studies in a series on housing supply and opportunity, “How Housing Supply Shapes Access to Opportunity for Renters,” by Elizabeth Kneeborne and Mark Trainer. The other half of this series, which we’ll cover next, addresses homeownership. The big takeaways for renters:

By now, you may have noticed a pattern in The Homework newsletter: we at California YIMBY aren’t making this stuff up. Time and again, evidence shows that restricting housing construction to low-density, single-family homes in affluent, high-opportunity neighborhoods hurts economic mobility, and makes our society more unequal. It’s time to reverse this trend.

First, in a just and equitable society, you would expect to see growth in metro areas to correlate with density, not sprawl. But unless you’ve been living under a rock, you’re well aware by now that the United States has subsidized sprawl and white flight at the expense of more diverse, productive, and ecologically sustainable urban metros. So it’s not surprise that most of the country’s biggest cities have seen an increase in predominantly single-family neighborhoods, but it’s nice to see it mapped out. Here’s what that looks like: 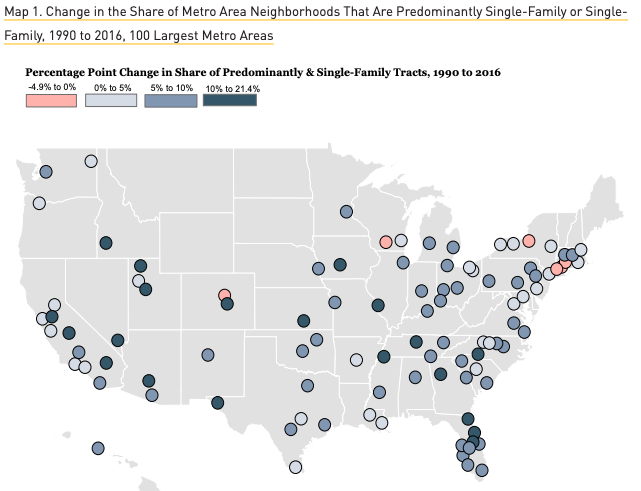 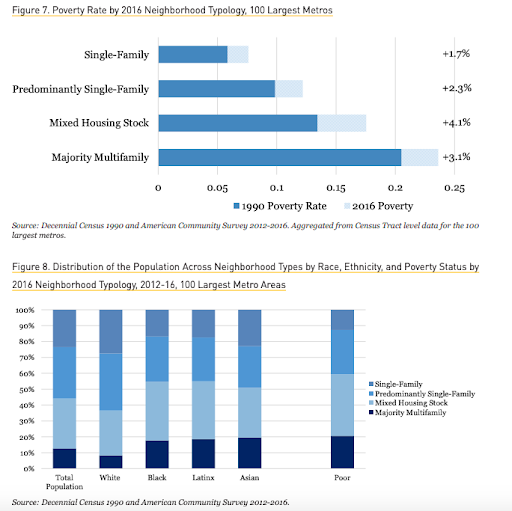 So far, this has largely covered renters scrambling for opportunity on the private market. What about renters accessing subsidized housing? There, too, Kneeborne and Trainer found troubling patterns of segregation and inequality.

Considering that the Low Income Housing Tax Credit (LIHTC) is the most widespread financing tool for affordable housing in the United States today, it is not entirely unexpected to see most subsidized housing projects since 1990 in the form of higher-density construction—74 units on average.  But as we have just seen, density has become negatively correlated with wealth and opportunity, so more affordable housing has been added in neighborhoods where residents are more likely to stay poor.

The reasons for these disparities sound familiar to anyone with a cursory knowledge of American segregation—i.e. racism and classism—but the fears of affluent residents that new neighbors in subsidized housing will degrade the quality of the area are entirely unfounded. In contrast, residents in the rare LIHTC projects that do get built in wealthier, largely single-family neighborhoods enjoy tremendous economic benefits.

In response to these trends, the Terner Center presents some key recommendations:

Sounds great! Let’s get to work.