The other half of the Terner Center’s new research series investigates the connection between housing supply and entry-level homeownership. Since owning a home has been a pivotal rung on the ladder to the American middle class, the availability of housing affordable for first-time homebuyers is a critical piece of the puzzle in tackling the nation’s widening wealth inequalities. Key takeaways:

Naturally, here’s the kicker: we can reverse these trends by building more housing, more densely.

Authors Elizabeth Kneebone and Mark Trainer analyze data from Zillow and the Census Bureau to glean new insights on the housing supply crisis increasingly affecting the poor and middle class alike. While home construction permits have taken a nosedive in recent years relative to population growth and new households, there are some confounding variables that need to be untangled. Although new housing starts have fallen behind household formation since the Great Recession, Kneebone and Trainer caution that there may be an underlying vicious cycle, because “the lack of available and affordable housing can suppress household formation (e.g., because young adults delay starting their own households or because families double up to share housing costs).”

But what about stagnant wages and unemployment—all of which worsened during the recession? It turns out that even when controlling for strong job markets. Coastal cities are doing a terrible job at enabling enough housing production. Detroit and Cleveland have seen massive job losses and shrinking populations, with a commensurate decrease in housing construction—but San Francisco and New York, with the exact opposite economic conditions, have seen similarly anemic housing growth. This map below illustrates the dilemma: 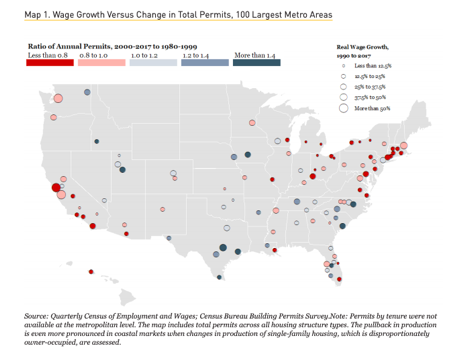 For entry-level homeownership, another important variable is the type of new housing being built, not just how much of it. And that, too, is disadvantaging lower-income households.

Although many cities have seen single-family housing dominate in the production of new owner-occupied housing, this new housing is generally getting much larger, and unnecessarily so. Since 2010, Kneebone and Trainer find that half of all new ownership units have at least four bedrooms—a 20% increase since the 1980s. This is also reflected in an increase in median square footage. On average, new owner-occupied units are 50% larger in their floor plans than they were in the 1980s.

Troublingly, this actually means more living space per person, at a time when housing for the average household in the United States is less affordable than ever. “This shift toward larger homes is not a reflection of changing household needs,” the authors note. “On the contrary, the average household size has fallen from 2.8 in 1980 to 2.5 in 2017, and only one in five households had four or more people in 2017.”

As one might expect, this means less housing is available in all price ranges, in all major metro areas, with a commensurate spike in prices. Here’s what that looks like over the past decade: 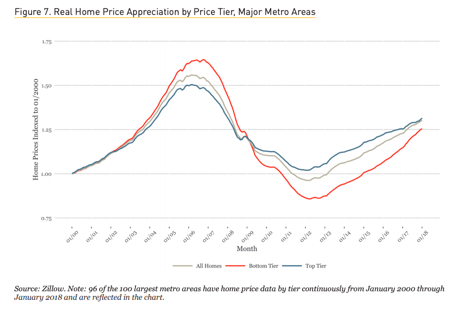 Consequently, young families, people of color, and the working class are increasingly pushed out of the bottom tier of the for-sale housing market. In 2016, Black households represented just 6.6% of new homebuyers, a 2% decrease since 2000. During the same period of time, the share of new homebuyers under the age of 35 fell by 4% nationwide, and as much as 10% in faster-growing metros such as Austin, Denver, and Charlotte.

California YIMBY is pleased to share the researcher’s policy recommendations for remedying this inequity: build more housing, and build it closer together. Other recommendations targeted at federal policy include reforming condominium lending rules, reducing material costs exacerbated by Trump’s tariffs, and investing in preservation and renovation of affordable housing. We can tackle some of these issues right here and right now in California. Here’s how:

“Local land use decisions that restrict the development of higher-density, ‘missing’ middle housing types are a significant contributor to these supply trends across all types of metropolitan markets,” Kneebone and Trainer explain. What if the middle wasn’t missing? That’s a policy choice. “Curtailing restrictions on higher-density housing (e.g., single-family zoning, height restrictions, minimum lot sizes) would enable more production and could make homeownership opportunities more inclusive.”

We can make this happen by passing Senator Scott Wiener’s Senate Bill 50 in January 2020. Everyone deserves a safe and secure home.