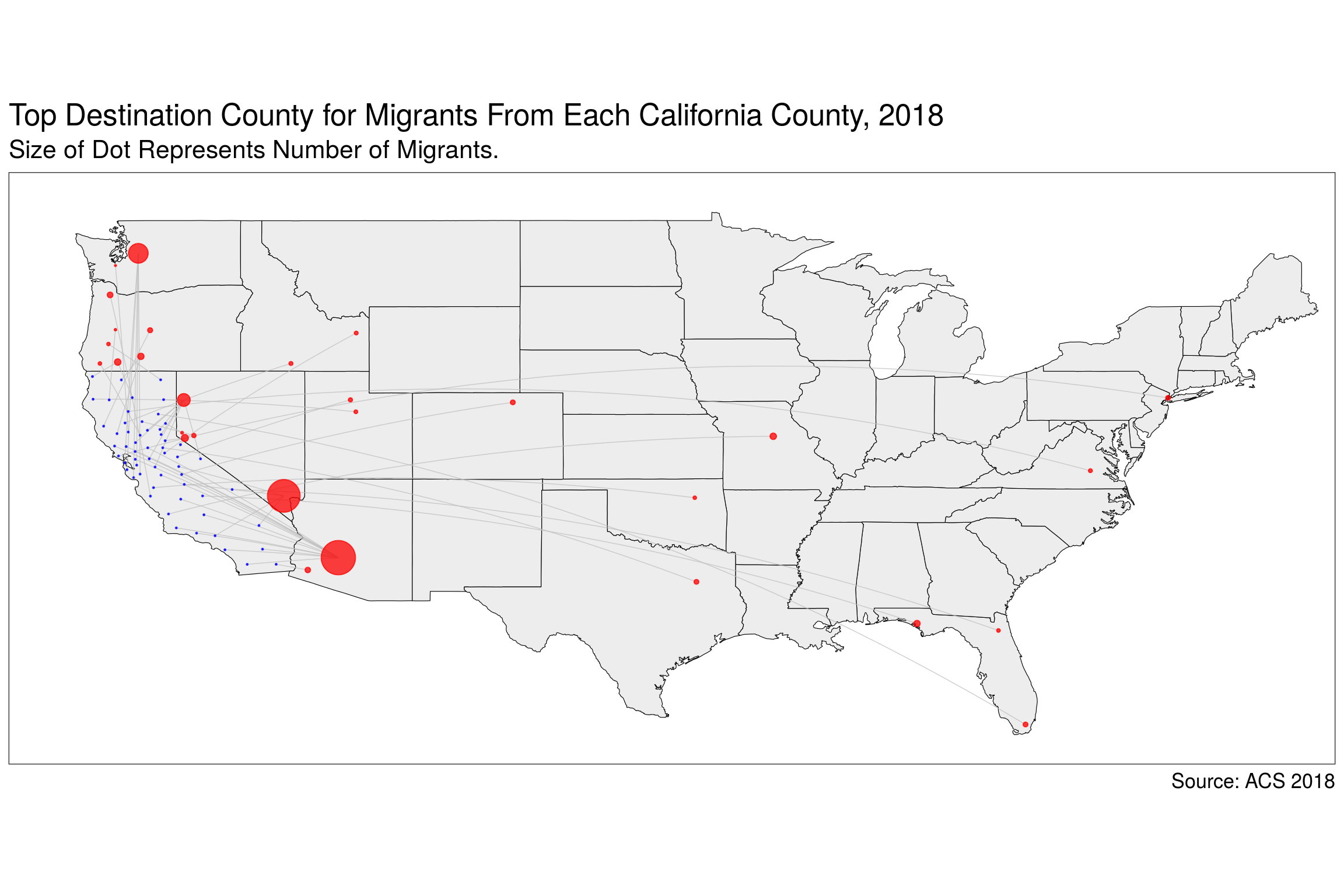 Did Displacement Play a Role in California’s COVID-19 Surge?

By far, the two most popular destinations for Californians leaving the state are Maricopa County, Ariz.–home to Phoenix–and Clark County, Nev.–home to Las Vegas. Those two counties received about 34,000 and 33,000 Californians in 2018 alone. However, different parts of California are emigrating to different places when they choose to leave the state. As the above figure shows, King County, Washington is the top choice for people leaving the counties of the San Francisco Bay Area while people from Southern California and the Central Valley head to the Phoenix and Las Vegas areas as their top destination.

These three states–Arizona, Nevada and Washington–had vastly different experiences with COVID-19 this winter. As in California, case incidence began spiking in Arizona, Nevada and Washington in the weeks leading up to Thanksgiving. However, unlike in Arizona and Nevada, Washington was able to bend the curve back following the Thanksgiving holiday. The other two states as well as California saw tremendous surges post Thanksgiving which are just now beginning to abate. Most remarkable however, is that daily case counts in Washington and California were roughly equivalent in the weeks leading up to Thanksgiving. A few days after, they began to diverge drastically.

Moreover, both the Las Vegas and Phoenix areas were experiencing COVID-19 surges during November. Phoenix broke it’s previous record on case growth during that month, a record that was unfortunately broken again in December and then again in January. Nevada broke its statewide record on Nov. 23 with about 2,900 new cases–with a lion’s share of new cases coming from the Las Vegas area.

Examining the average daily death county provides an even more striking picture. While more lax testing regimes can artificially depress case counts below what their true number should be, COVID-19 fatalities provide a more stable, if not grimmer, picture of the disease’s prevalence in a given area. Looking at Los Angeles County in relation to Maricopa and Clark Counties, the higher daily death-rate in both prior to Thanksgiving would indicate a higher prevalence of COVID-19 infections in those areas. Most interestingly, the death rate in Los Angeles County began spiking around December 20, about 25 days after Thanksgiving and about the time the average person would succumb after being exposed to the coronavirus on that holiday.