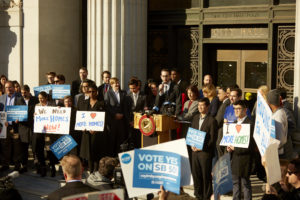 Cities that Meet or Beat Housing, Traffic Targets Will See No Changes

Sacramento, CA – Today California YIMBY and the office of State Senator Scott Wiener announced the re-launch of Senate Bill 50, the More HOMES Act, to coincide with the resumption of the legislative session in Sacramento. The bill, which has undergone substantial amendments regarding local flexibility since its last hearing in May, must be voted on by the full Senate by the end of January.

During a live event on the steps of Oakland City Hall, Sen. Wiener, elected officials, YIMBY partners and advocates announced a series of amendments designed to give California cities more flexibility in achieving the goals of the More HOMES Act, which — at its core — seeks to accelerate the pace of home building across the state, end the housing shortage, and reduce the pollution that causes climate change.

“The changes we’ve made to SB 50 give cities a broader menu of options that help them take a leadership role in solving the housing shortage,” said Brian Hanlon, President and CEO of California YIMBY. “Cities that want to stay ahead on this issue can make their own plans for how they add homes to their communities, while cities that fall behind will be subjected to the bill’s specific requirements. This gives cities all the flexibility they need to be a part of the solution.”

Under the new provisions added to SB 50, all cities in California will now have two years after the bill is signed to develop a housing plan that works for their specific needs. Local governments will take the lead in creating housing plans that will make it easier for Californians to live near their jobs, transit, and amenities, while protecting renters and sensitive communities against displacement.

Sensitive communities that are under-resourced and need to pair zoning reform with anti-displacement policy will not experience any zoning changes until five years after the bill is signed. Senator Wiener, California YIMBY and our allies will also work to ensure these communities receive state resources to support the planning process during the 5-year period.

“These new amendments recognize that cities should have some flexibility in how they implement SB 50’s goals,” said Sen. Wiener. “We’ve spent enormous time and energy speaking with and receiving feedback from a broad array of stakeholders, including local governments. We’ve heard loud and clear that cities want the flexibility to implement this kind of legislation in a way that works best for them.”

By giving cities more flexibility, the More HOMES Act ensures that housing needs can be met one of two ways: Either a) cities make their own plans that meet or beat the housing and traffic-reduction targets in SB 50, or b) the provisions of SB 50 kick in, and cities must comply.