To turn California into a state that welcomes everyone, we will need to build more housing at all price points. Sometimes, that can feel counterintuitive—if you are poor, how could new market-rate housing feel welcoming when you’re struggling to find a landlord who will accept your Section 8 voucher?

If we reverse-engineer today’s housing crisis, the solution seems pretty clear. Decades of building far too little housing to keep up with economic and population growth has led to fairly consistent spikes in housing costs. Simply allowing private homebuilders to provide sorely-needed housing where it is most desired, in transit-rich urban areas close to jobs, services, and amenities, would take tremendous pressure off California’s increasingly fraught middle class. But how exactly does this work?

A new working paper from the W.E. Upjohn Institute’s Evan Mast shows compelling evidence that the benefits of new market-rate housing are immediate, and helpful to poor households as well. There’s no “trickle-down” anything about it—we’re talking a downpour to end the drought.

Perhaps one silver lining to the long-standing urban housing shortage in the United States is that its complexity has engendered unique innovations in social science methodology. For all the housing we lack, we’re certainly not lacking in compelling research, and Mast’s methods are no exception: after compiling the address history data of 52,000 residents, Mast was able to track households moving from lower-income neighborhoods to newer homes, and model a simulation of migratory patterns that would emerge from future market-rate housing.

Mast concludes: “building 100 new market-rate units leads 45-70 and 17-39 people to move out of below-median and bottom-quintile income tracts, respectively, with almost all of the effect occurring within five years. This suggests that new construction reduces demand and loosens the housing market in low and middle-income areas, even in the short run.”

In an accompanying policy brief, Mast explains that his data reveals a sort of domino effect from the migration chains that ripple through newer and older housing units. “Some households who would have otherwise occupied cheaper units move into new units, reducing demand and lowering prices for the units they leave vacant,” he writes. That’s the theory, anyway. Mast’s examination of thousands of Change of Address forms, county assessor records, even magazine subscriptions and phonebooks shows that this happens surprisingly quickly through a range of income levels.

First, the obvious findings: migration chains ripple through newer and older housing supply incrementally. In other words, if a middle-class household of two teachers gets a raise, they’re not going to move from a cabin in the woods to a luxury penthouse suite. When a household moves into a newly-built home, their old home is vacated, and a slightly less wealthy household can move in—one that has now vacated their old home, which slightly lower-income residents in turn can afford, and so on. Without the new market-rate unit being built, this migration chain stops, and every household is slightly worse off for it. Here’s how that looks in Mast’s data: 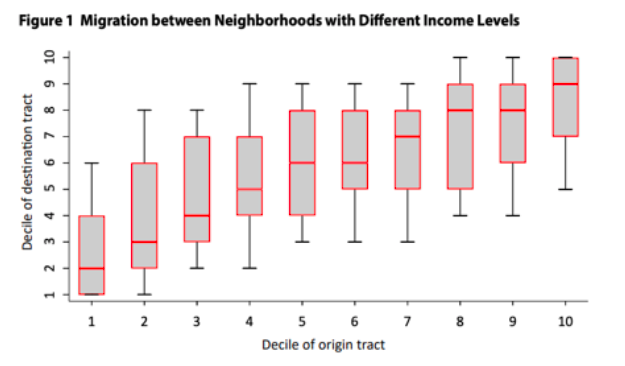 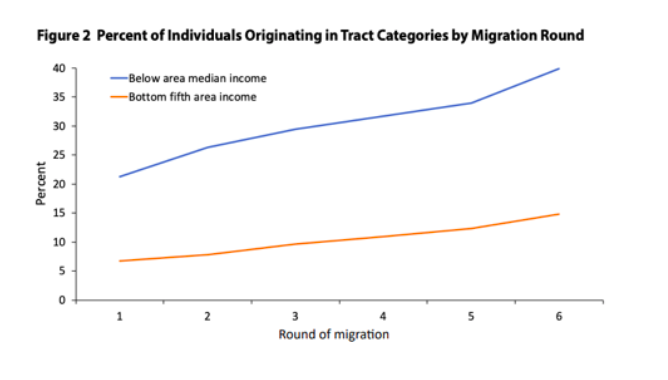 Through six rounds of moves tracked in the data, a consistent pattern emerges: 20 percent of residents in new homes moved from neighborhoods below their metro area’s median income. By the sixth round, that doubled. In other words: 40 percent of residents moving in to vacated units six degrees of separation from the new construction had moved from poorer neighborhoods. Again, Mast does not mince words with this evidence: “These relationships are inconsistent with the idea of a highly segmented market in which new construction does not affect low-income areas,” he writes.

In order to illustrate this process, Mast modeled a simulation from the data and built in some real-world theoretical assumption: what if not everyone moves? The simulation modeled assumes that a hypothetical migration chain is finite, and estimates the probability that a poorer neighborhood would benefit from the units freed up by the upward mobility that new market-rate homes enable. In other words, if the richest enclave in a region builds a metric boatload of shiny new apartment towers, will that really alleviate the shortage in poorer neighborhoods?

Mast’s model suggests that they will. “The household that left reduces demand by one, while building a unit increases supply by one,” Mast writes. “Either way, the result is a newly vacant unit.” That should be music to your ears if you’ve ever endured a desperate search for housing in California.

There’s an important caveat: housing prices have a floor, in the form of construction and maintenance costs, so this won’t be enough to help households too poor to afford the “minimum” cost of housing. For those less fortunate, Mast recommends policies that we are also proud to support: vouchers and subsidies, and inclusionary zoning requirements. Banning source of income discrimination to empower Section 8 renters, increasing subsidies for affordable housing construction, and streamlining the production of inclusionary projects are essential policies for mitigating this crisis.

Nevertheless, Mast also notes: “Market mechanisms will likely be more effective at reducing prices in low-income areas where vacancy rates are low.” Otherwise, Mast cautions that increasing vacancies may hurt struggling communities further by shrinking the population—but our proposals are focused on cities that are growing, and low-income neighborhoods where prices are skyrocketing despite low incomes.

This was the logic behind the “jobs-rich” designation in Sen. Scott Wiener’s Senate Bill 50, the fair housing legislation California YIMBY is proud to cosponsor. There’s now even more evidence that California’s wealthiest communities that suppress housing construction are hurting the poorest neighborhoods by closing their gates to newcomers, casting higher-income households out into lower-income communities rather than giving poorer workers a chance to join their high-opportunity Shangri-Las. The status quo is effectively making economic mobility illegal, and we won’t stand for it.