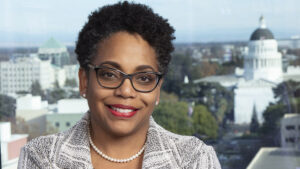 I have experienced everything from homelessness to homeownership. I grew up in public housing with a single mom who purchased her first home through a first-time homebuyer program in the mid ’70s. It used to be that a single woman couldn’t take a mortgage out in her own name, but the laws passed as part of the Fair Housing Act allowed my mom to get a mortgage and become a homeowner.

My mother was able to leverage homeownership to make sure her two girls went to college and earned graduate degrees — owning her own home made it possible to break generational cycles of poverty. My lived experience has shown me how housing touches every aspect of our lives and plays such a huge role in our personal stability and prosperity.

This is why ensuring that people have access to safe, sanitary, and decent housing has been so integral to what I believe, and why I do what I do.

Before I began working in housing, I was the chief consultant to the Assembly Housing and Community Development Committee at the state Capitol. I already had a passion for housing, and I was always interested in redevelopment as a mixture of housing, community, and economic development. When I was a young girl, the local redevelopment agency rebuilt my great aunt’s home from what was basically a shack into a beautiful home. It left such an impression on me as a child.

So, when I had the opportunity to join the Sacramento Housing and Redevelopment Agency as an agency counsel, I made the move from policymaker to practitioner. I started to connect the dots and see how the policies we were making made an impact in real life. It gave me a real grounding for how to actually implement policy in a way that brings tangible benefits to people’s lives.

When I became Executive Director of the California Housing Finance Agency six years ago, our credit ratings weren’t good and we weren’t really lending. But our leadership team had a vision to become the best housing finance agency in the nation, and now I can say we’ve achieved that. We’re currently lending at record levels in our single family and multifamily programs. We are focused on serving a broad range of incomes in a financially sustainable way. I’m so proud of the work we’re doing and the incredible team we’ve built of passionate, thoughtful people who show up every day and do the work that has brought us to where we are today.

I’m also really proud of the 18 months of work that we did with the California State Treasurer’s Tax Credit Allocation (CTCAC) and Debt Limit Allocation (CDLAC) committees. Multifamily affordable housing doesn’t get built in California without a bond or a tax credit, but the regulations had not been updated in many years. California’s housing leadership, with guidance from the Governor and the Treasurer, collaborated on regulatory reform and adopted a new scoring system to align with the state of California’s policy priorities, specifically to make sure these state resources were focusing on affirmatively furthering fair housing.

All that hard work paid off: now, for the first time ever, there is a black, indigenous, and people of color (BIPOC) pool within the Qualified Residential Rental Project bonds, so that BIPOC-led housing developers, with boards that are also made up of black, indigenous, and people of color, can access that pool — and build urgently needed housing in their communities.

We were also able to look at the barriers that BIPOC developers have in entering and accessing the affordable housing finance system. For example, the scoring system required that a developer have “experience” — but how do you get “experience” as a developer when the finance system initially discriminated against you? We changed some of the thresholds so the people who’d been systematically excluded would be given the chance to develop affordable housing.

One of the key principles of “fair housing” is that as much as possible, it should be located in areas of opportunity, near schools, transit, and grocery stores. We were able to build that principle into the backbone of California’s affordable housing finance system, so I’m very, very proud of that work, and it will be exciting to see what comes of it.

When we talk about affordable housing, affordable homeownership is often left out of the conversation. Right now, we’re not building entry-level homes. We could be building gentle density where it makes sense, in neighborhoods where low or moderate income people may not be able to afford to buy a single-family home, but could buy a duplex as a naturally occurring affordable home. In some of our wealthier, more established communities, we should make it legal to build entry-level homes that would give people with median salaries the opportunity to buy into a community that they otherwise couldn’t get into.

We need to really start thinking about affordable homeownership as part of the continuum of housing, when we talk about homeless housing and affordable multifamily housing. This is a mechanism to get at the systemic, historical racism that precluded folks who are now locked out from those communities. It’s not only a way to build wealth in communities, but it’s a way to help stabilize those communities and, frankly, give some folks who want to live where they were raised the ability to stay in those neighborhoods.

There is no silver bullet to solve our housing crisis. It took us 40 years to get in the position we are in now, and we can’t fix it instantly or buy our way out. In my mind, it will take federal, state, and local governments working together on an alignment of resources, regulatory relief, and actually building, because we do have a production issue. We need a bigger, broader, cross-sector collaboration, because sometimes the different groups working on housing, whether it’s the advocates or the nonprofits, are working at cross purposes with one another.

The most challenging questions in my mind are: What’s the common ground? How can we move the needle forward for all of us? If we want to succeed, we really have to work behind the scenes, put processes and procedures in place, and manage the programs we have so that they work together. That’s the step we don’t pay attention to, because it’s hard. Let’s take a look at what’s working, what’s not working, roll up our sleeves, and get it done.