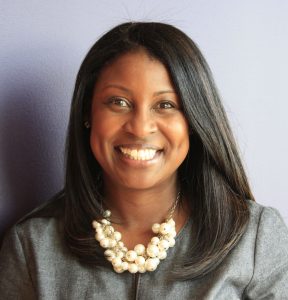 My work in housing goes all the way back to riding the bus from South Central Los Angeles to the Westside of LA as an elementary school student. On that bus ride, I started to see that my community looked different from others.

It took years of experience and education to understand why those inequities exist. As a little girl, I saw that my neighborhood could be what other neighborhoods were. I didn’t feel that I had to move somewhere else. Instead, it became one of my goals to make my community a great place, with the kinds of shops, jobs, housing, greenery, and parks that other communities had.

I’m still idealistic, and I believe that communities like the one where I grew up don’t have the investment they deserve — but they need it, they can get it, and I’m going to advocate for it. I’m going to make them great places.

Where I grew up, nobody would ever expect to see a new office building constructed. But when I worked at West Angeles Community Development Corporation, I garnered private sector resources to build the first commercial office building, a retail complex at Crenshaw and Jefferson with a financial institution, groceries and fresh food, and a healthcare center. It took me 10 years, and there were a lot of moments along the way when I thought it would not be possible, but we just kept going. My name isn’t on it, but I know that it’s there because I cared and spent the time to make it happen.

When I started with LISC in 2015, the Los Angeles office was on the verge of closing and wasn’t lending to anyone. In 2020, after toiling for years creating opportunity, we deployed more than $150,000 in grants and loans to communities that needed it most throughout LA County. Those grants represent 25 percent of all of the funds that LISC deployed nationally last year. I’m proud to have built teams and institutional organizations both at West Angeles and LISC LA, and that my work has impacted thousands of people.

Another critical part of my upbringing was that my grandmother owned her home. That home provided stability, because I lost my dad when I was a year old and it was difficult for my mother to sustain housing for us on her wages as a working single mom. There were eight of us, or sometimes more, in a two-bedroom home, but I knew where home was, and I had a space where I could rest comfortably.

While we always had my grandmother and her home to fall back on, I also empathize with children whose housing is not stable. I understand what it’s like as a child to go to school wondering if you’ll be able to return home at the end of the day and deciding what belongings you need to take in your backpack so you don’t lose them.

Because of that experience, I bought my house when I was still in my 20s, but I know that not everybody has been able to get the education and stable job that I’ve had in order to purchase a home. I am intimately familiar with all our federal, state, and local housing laws and programs, because I have family members who rely on those today. I understand and will constantly be an advocate for making sure everybody has access to decent, safe, and affordable housing.

Many people just aren’t aware of the fact that we are not producing nearly enough homes to keep pace with the number of people living in California. Even to the extent that people do know about our housing crisis, many of them still have an ingrained perception of the housing landscape in greater Los Angeles.

We have the dream of a single-family home of a certain size, located in a certain way within neighborhoods. It’s been very difficult to get people to think about different kinds of models for where housing can be and what it can look like. We need to make sure we’re showing how building different kinds of housing, including more dense housing, doesn’t create negatives, but in fact creates more positives.

At LISC LA, a lot of our work is focused on increasing the supply of housing and advocating for policies that increase the available financing to build more. We also have been lifting up creative opportunities to add homes to the Los Angeles landscape. We’ve focused on accessory dwelling units and trying to find ways to quickly add housing but preserve the character of the neighborhood. We’ve also been looking at Washington, D.C.’s Tenant Opportunity to Purchase Act (TOPA) as a model for long-term residents in multi-family developments to become a part of the ownership structure, to provide long-term housing sustainability and wealth building for communities.

Most of the affordable housing that we finance at LISC utilizes the low-income housing tax credit. This credit has an ecosystem of developers, construction companies, legal teams, architectural firms, land-use consultants, and something called syndication consultants, all of which stand to make millions of dollars. One of the things that I’ve been very critical about is that the vast majority of these businesses are not diverse-owned.

As a field, it is time for us to turn the mirror around and look at what we are doing. Are we going to house people in affordable housing, making them dependent upon this rental commodity, but do very little to ensure that their lives are improved, so that in the future they or their children are not still looking for another rental in the same way? I’ve been working with a group of colleagues to raise awareness about our role as an industry in perpetuating this.

For too long we have developed affordable housing in the name of benefiting communities, without including them in the wealth generation aspect of our work. We can have an impact and disrupt that cycle of poverty by investing in diverse firms, so that the transfer of wealth through the development of each unit, goes into those communities, not out of them.

Right now, about 80,000 people in Los Angeles County don’t have homes, which has been made worse by the COVID-19 crisis. We have to face the facts that we don’t have enough units, and the wages we have just do not keep pace with the cost of housing.

We need to declare a state of emergency given the number of people who do not have homes. We’ve got to figure out if we are serious about making housing a right. If that’s the case, let’s extend what we know colloquially as the Section 8 program, so that everybody has a voucher who qualifies.

Long-term, we need to address the racial wealth gap, because the average white family’s wealth is 10 times that of the average Black family. We have to chip away at that disparity and create pathways for Black households to be able to access homeownership opportunities. It made all the world of difference for my family. If more Black families could access homeownership, it would have an impact on the fact that the vast majority of people without housing are Black, disproportionate to the overall population.

One thing that can dissuade others from doing this kind of work is the difficulty of getting enough money and attention on the really important issues. How in the world in Tinsel Town, in a place where you have so much celebrity, genius, and money, do we have anyone without a home? It’s a challenge to get people to understand our interconnectedness and how if some people are in need, that impacts all of us on a multitude of levels. 2020 has helped show us that. Then, even more challenging is raising the resources and bringing together the kinds of policies that are needed so the least among us is treated as best as possible, and so that we all have a chance at survival.