Welcome to the September 29, 2022 Main edition of The HomeWork, the official newsletter of California YIMBY — legislative updates, news clips, housing research and analysis, and the latest writings from the California YIMBY team.

The legislative session has come to a close and Governor Gavin Newsom has signed all of California YIMBY’s 2021 – 2022 priority housing legislation into law, capping a session that saw some of the most significant pro-housing reforms since the dawn of the YIMBY movement.

Last week, Gov. Newsom signed into law AB 2097,* a landmark bill that ends nearly a century of parking mandates in cities throughout the state. Authored by Assemblymember Laura Friedman (Glendale) and co-sponsored by California YIMBY, AB 2097 increases housing choice and will make it easier to provide lower-cost, walkable- and transit-accessible housing across the state.

Then this week, the Governor followed up by signing AB 2011, by Asm. Buffy Wicks – the most sweeping housing and land use reform of this session. It allows affordable housing to be built “by-right” in commercially-zoned districts, while including strong protections for the environment and labor standards such as prevailing wages and health insurance.

The Governor also signed SB 886* (Sen. Wiener), which streamlines student and faculty housing on land owned by the University of California, California State University, and community colleges; and AB 2221 (Asm. Quirk-Silva), which clarifies ADU law to make it faster and easier to build these popular “casitas.”

We’ll have more to say on these legislative wins and other policy developments after the deadline for bills passes on September 30, but for now, it’s the season of [Victory Alerts].

* indicates a bill is sponsored by California YIMBY

Detroit’s War Against Our Kids

The United States is in the midst of a traffic violence epidemic, with motor vehicle collisions among the leading causes of death for children, and annual traffic deaths reaching 16-year highs. The increasing share of SUVs on the road is a major driver of this deadly crisis.

Edwards & Lenard (2022) at the University of Illinois at Springfield find evidence that SUVs have been significantly deadlier for pedestrians and cyclists than the average passenger vehicle since traffic fatalities began increasing in 2009. 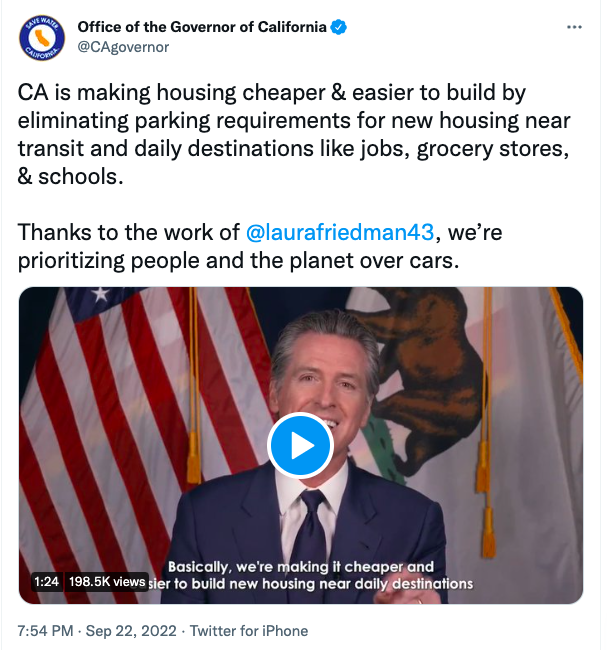 Want to receive this in your inbox? Sign up to get it here.