In an early installment of The Homework, we covered the first few research briefs in a new series from UC Berkeley’s Othering and Belonging Institute (OBI) on the Bay Area’s deeply entrenched residential segregation. In this final episode of the series, OBI’s Menendian, Gambhir and Gailes propose key reforms for desegregating our region’s cities.

Menendian, Gambhir & Gailes (2020) have mapped the effect of prohibiting multifamily development on racial integration in the San Francisco Bay Area, and the data is dramatic. “Cities with higher levels of single-family zoning are more racially homogenous within their boundaries, and often have lower intra-city segregation than more diverse neighborhoods with low levels of single-family zoning,” the authors note.

Cities with over 90% of residential land reserved for single-family homes had an average white population share of 53%, a full 13% greater than the Bay Area overall. While those cities tended to be more internally homogeneous, cities with 40-75% of land zoned single-family had a smaller white population share, but far greater intra-city segregation. 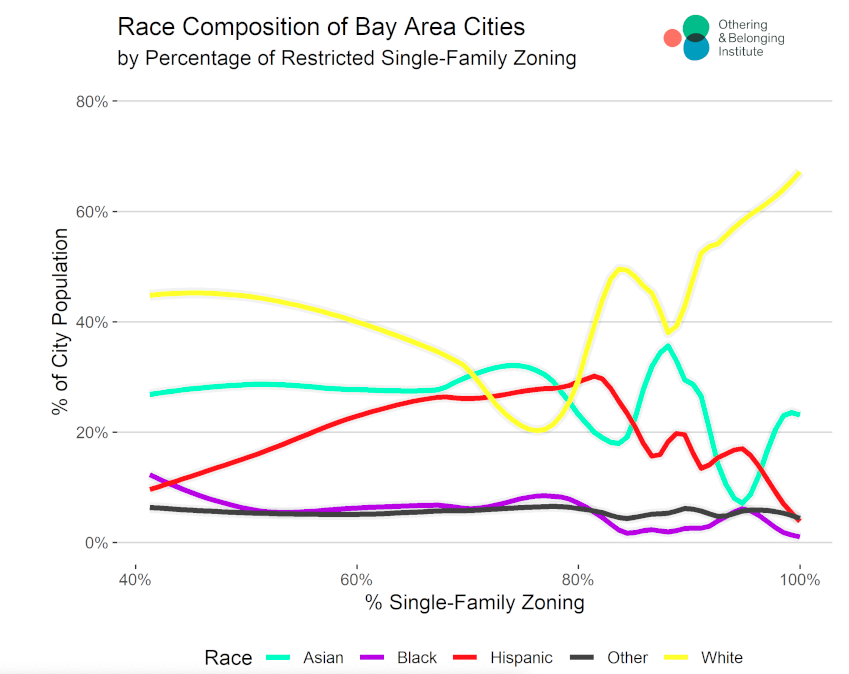 While zoning reform is by no means a panacea, the authors note that it’s a gating factor for all other possible approaches: Low-income housing subsidies and mandates for inclusion are important, they argue, but “without rolling back exclusionary land use policies, these goals are impossible, not simply elusive.”

What other strategies are needed? The researchers take a look at rent control and find research on these approaches lacking. “The dearth of research on the relationship between rent control policies and integration is likely a byproduct of segregation and fair housing not being a primary focus of rent control research,” the authors suggest. “This lack of evidence, however, should not be dissuasive on the critical role that rent control can play to preserve integration where it exists or where gentrification is occurring.” The researchers propose examining different rent control mechanisms for different issues—for example, relatively more-integrated neighborhoods that are experiencing displacement pressures may benefit from rent stabilization, while historically segregated neighborhoods may require different policies to promote integration, rather than simply preserving it.

Actively promoting integration when the shovels break ground is just as important as policies that determine what can be built at all. How can diverse communities flourish in places that have spurned diversity?

There are some encouraging results from Seattle, where the Creating Moves to Opportunity program provided low-income voucher holders with counseling and targeted assistance, resulting in more voucher holders moving to high-opportunity neighborhoods. “The results suggested that price or affordability was not the only barrier to higher opportunity areas, but that more structural or psychological constraints inhibited such moves,” the authors note. “Counseling not only helps families make more informed decisions, but also provided much needed emotional support.” The authors also recommend looking into cash incentives such as “mobility grants” to welcome low-income households into exclusionary communities, such as the Bay Area suburbs of Piedmont and Danville.

Inclusionary zoning ordinances may also promote integration, but cases vary widely by municipality, and the incentives must be well-calibrated. Instead of mandating integration for each project proposed, the authors propose a fair share approach, requiring cities to provide a “fair share” of affordable housing city-wide, rather than a minimum for each individual development.

To that end, the authors propose that California implement rigorous enforcement of its Regional Housing Need Allocation (RHNA) standards, which ought to provide for more income integration in all Bay Area cities — but rarely do. In fact, this paper finds that the cities that were furthest behind on their state-mandated RHNA obligations also had the most single-family zoning as a share of their residential land.